COMMENTS FROM THE STUDIO

The time is upon us! We’re back with another installment of our Crea-ture DevBlog, and the final dev blog for our V1 Production. August was another huge month for Session as we continue to cruise to our full launch on the 22nd of September!

Since the last update

We’ve been playing as much of the game as possible, looking for any improvements we could make for players before V1 releases. Our features and content have been locked for well over a month now, and finally all of our DeBug and Optimization efforts have also ended!

Our day 1 patch is out for approval and we’re working hard on everything that remains for launch and post-launch life!

We’ve made some major progress in liptricks and transitions, allowing the player to seamlessly transfer from the transition, to a lip trick, and back into the transition without popping!

Lip Tricks are accessed through the powerslide mechanic. This update to the powerslide mechanic not only engages lip tricks, but it also works on flat ground. It can therefore be used when approaching the coping from the deck, or top side, of the ramp as well as on any flat surfaces that transition to an edge.

Skating in transition is where the lip tricks shine, and getting into your grind or stall is one thing – but the transfer back out to the ramp transition poses its own wealth of challenges. Most notable was the need to allow the player to flow & choose their orientation when coming into the transition. This was addressed by using the right and left bumpers to transfer your weight back into the ramp, much as one would do in real life. This seamless approach, paired with the ability to pop in or out of any lip trick, provides endless gameplay possibilities with our liptrick and transition systems!

Continuing in the skate realm, scoop flip variation speeds are now variable based solely off of the flip input speed and can be managed independent of scoop speed when “Sync Flip/Scoops” is turned “On” in the FLip Tricks Settings. If you want a slow varial flip – huck the first scoop input – and use the flip speed input to determine the overall and coordinated flip/scoop speed. Slow flip input = slow varial and flip. Fast flip input = fast varial & flip…if it’s not to your liking – it can always be set to off in the Flip Trick Settings menu.

In order to make the most of our gameplay features, we will continue to produce maps in post-launch. However, we still had some unannounced V1 maps that Donovan unveiled last month. Our final V1 city for Launch will be San Francisco’s famous Pier 7 and China Banks maps. Included in the China Banks map is a recreation of the famous SF Atlas skate shop. Another awesome collaboration we’ve thankfully been able to pull off thanks to our team at Black Sun Productions!

In the Licensing department – we’re happy to share that we have secured the rights to continue with our Red Robin & Chillhop radio stations. The latter added an additional 22 tracks with their Up Tempo radio station. Keep your ears peeled for future updates on our radio stations…

Beyond tweaking features, closing content, and closing branding deals last month, we continued to work on consistency and de-bug.

One of the bigger team pleasers amongst the last month’s fixes is, by far, the improvement to the foot & board interaction. The player’s feet now rarely clip through the board, greatly improving the flow and visuals of tricks. This fix includes, but is not limited to, your hardflips, inward heel flips, and many more!

Another improvement related to realism is the addition of a more in-depth player collision bail system. When physical animation is Turned On in Experimental settings – the player will notice that their characters’ interaction in the world becomes more critical. This change allows the players’ arms and legs to be accounted for in the bail system, leading to more realistic bails in tight situations. Prepare for the trick too early and smoke your lower back, timing and alignment becomes even more critical when you turn Physical Animation on!

Other fixes include nuisance and consistency issues such as the tendency to bounce off of world collision when popping too close to an obstacle. This is now fixed and the player either clears the obstacle or bails, but you will no longer pop up into the air.

Oh – and we also got rid of the dastardly “ghost push” where the push animation and audio would not play, but you would receive the push speed increase, leading to difficulty gauging push input and speed output. Another small bug fix that greatly improves the overall gameplay comfort and consistency.

Finally, outside of the skate updates we have more fixes.

Our dear community manager – Donovan – pointed out a clear shortcoming in our replay editor pause menu options. For any of you aspiring filmers out there – “Camera” options & “Day/Night” options are now available directly in the Replay Editor pause menu allowing you to stay in your flow while editing! 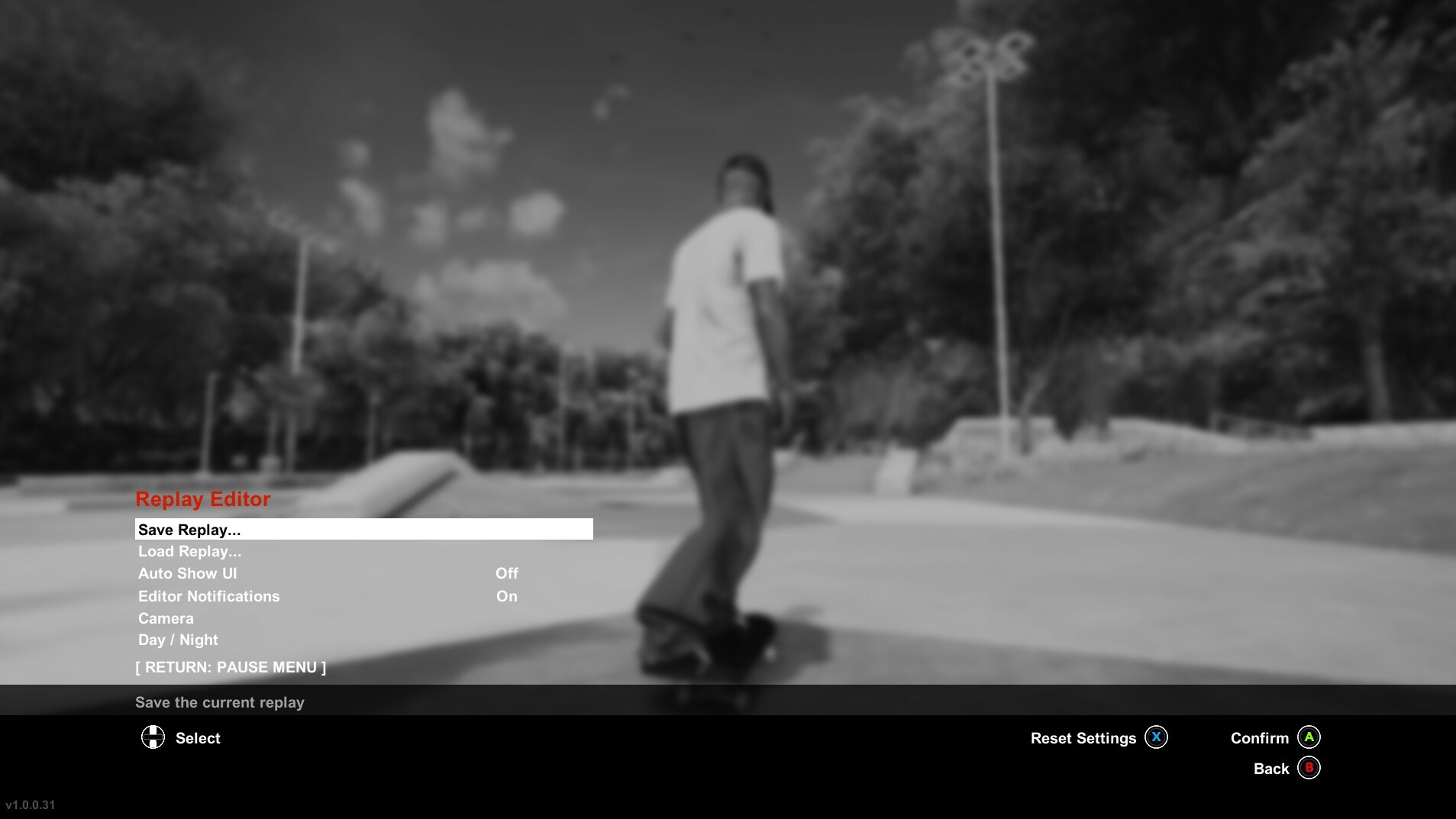 We also made some fixes to our screen and video settings. We have added the ability to play in 4:3 without fisheye, and at the same time fixed the fisheye aspect 4:3, which was displaying incorrectly.

Auto Grind has been cut – the beginner level gameplay feature was not functioning with our updated and improved grind system – making the feature broken & redundant and causing more problems than it resolved.

The final critical gameplay update in preparation for the launch of V1 is the confirmation that Save Files will indeed be wiped to account for the full mission system and the reward/unlock economy. This will be the last save file wipe for Session, and officially marks the end of Early Access.

As mentioned in previous dev blogs – ALL gameplay features will be included with our patches and will be free for ALL players!

More info will be shared on our Patch & DLC plans after launch!

We’re days away from our first full release – so keep an eye out for studio and game updates in the near future!

Recruiting continues – keep an eye on the studio’s LinkedIn page for open roles.

CVs can be also sent to info@crea-turestudios.com

Session: Statement Regarding Pricing and Banners