Share
Facebook Twitter Reddit WhatsApp
The Horizon Road Trip is coming to Forza Horizon 5 on Tuesday, September 13 with new cars, fresh body kits and a Festival Playlist inspired by the unique types of racing in Mexico. Don’t forget to pack your luggage, we’re going on a road trip!
Game Fixes and Release Notes

The Horizon Road Trip introduces new fixes and improvements to Forza Horizon 5. Here’s a snapshot of some of the changes you can look forward to in the forthcoming update:

For the full list of fixes and improvements in the Horizon Road Trip, check out our release notes. We continue to listen closely to your Forza Horizon 5 feedback as we introduce new fixes with each game update. Here’s where you can stay up to date on the issues that we’re currently investigating. 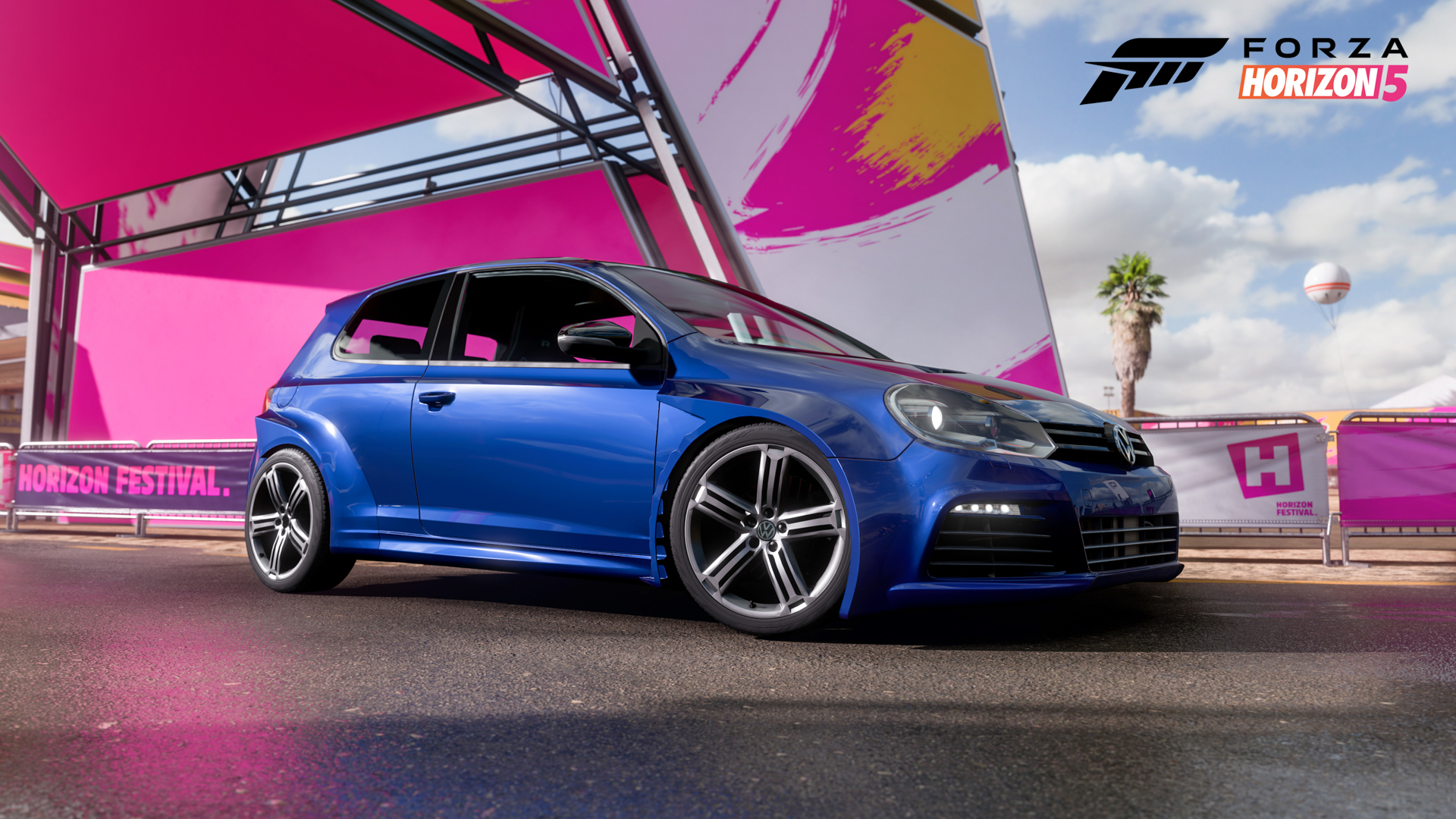 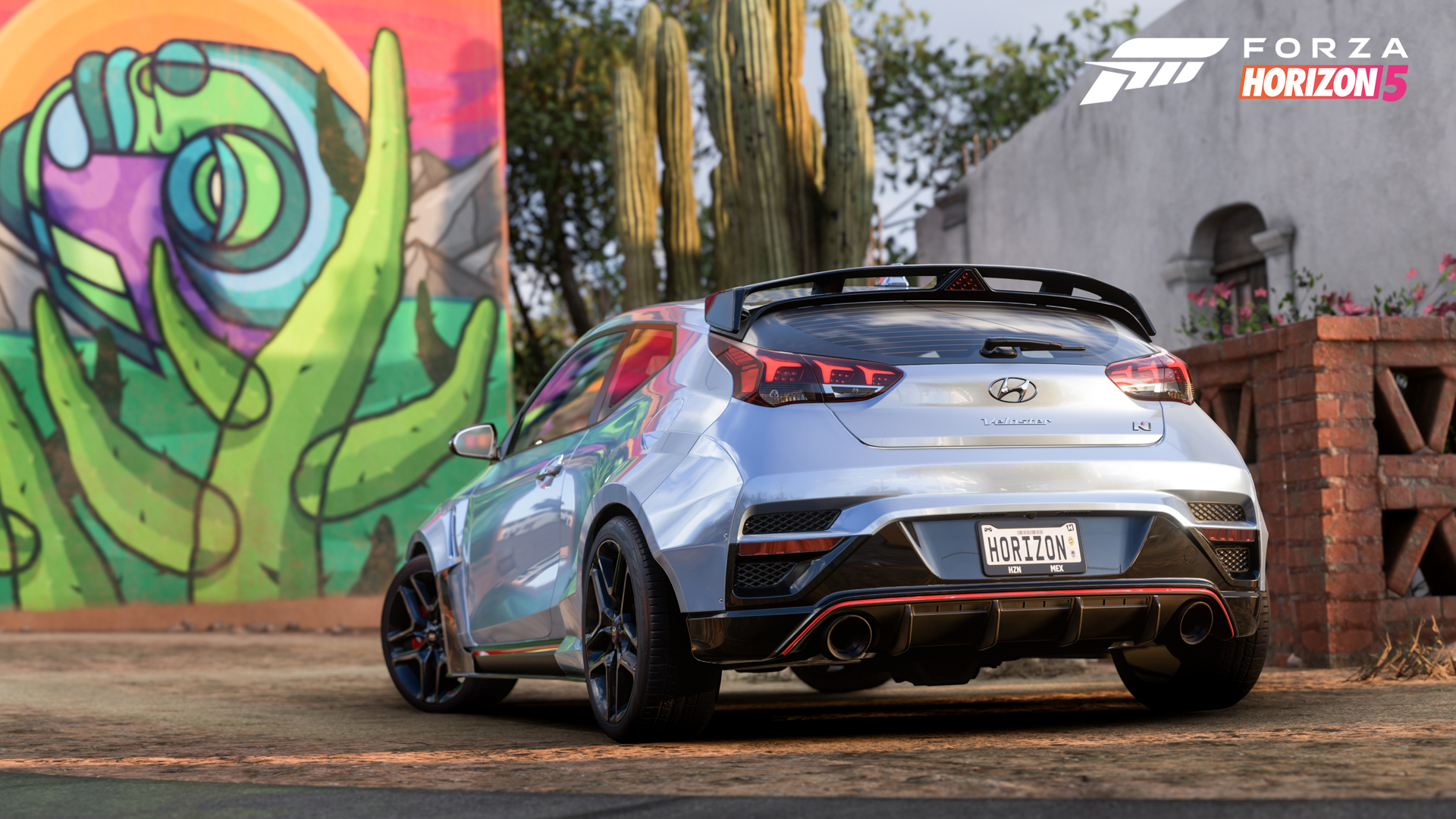 For character customization, we’re introducing a new clothing category called Amplification. Here you will find a selection of hearing aids in various colors that can be applied to your character. You may even find one of the Horizon Festival’s mascot, Tank! The available configurations include: 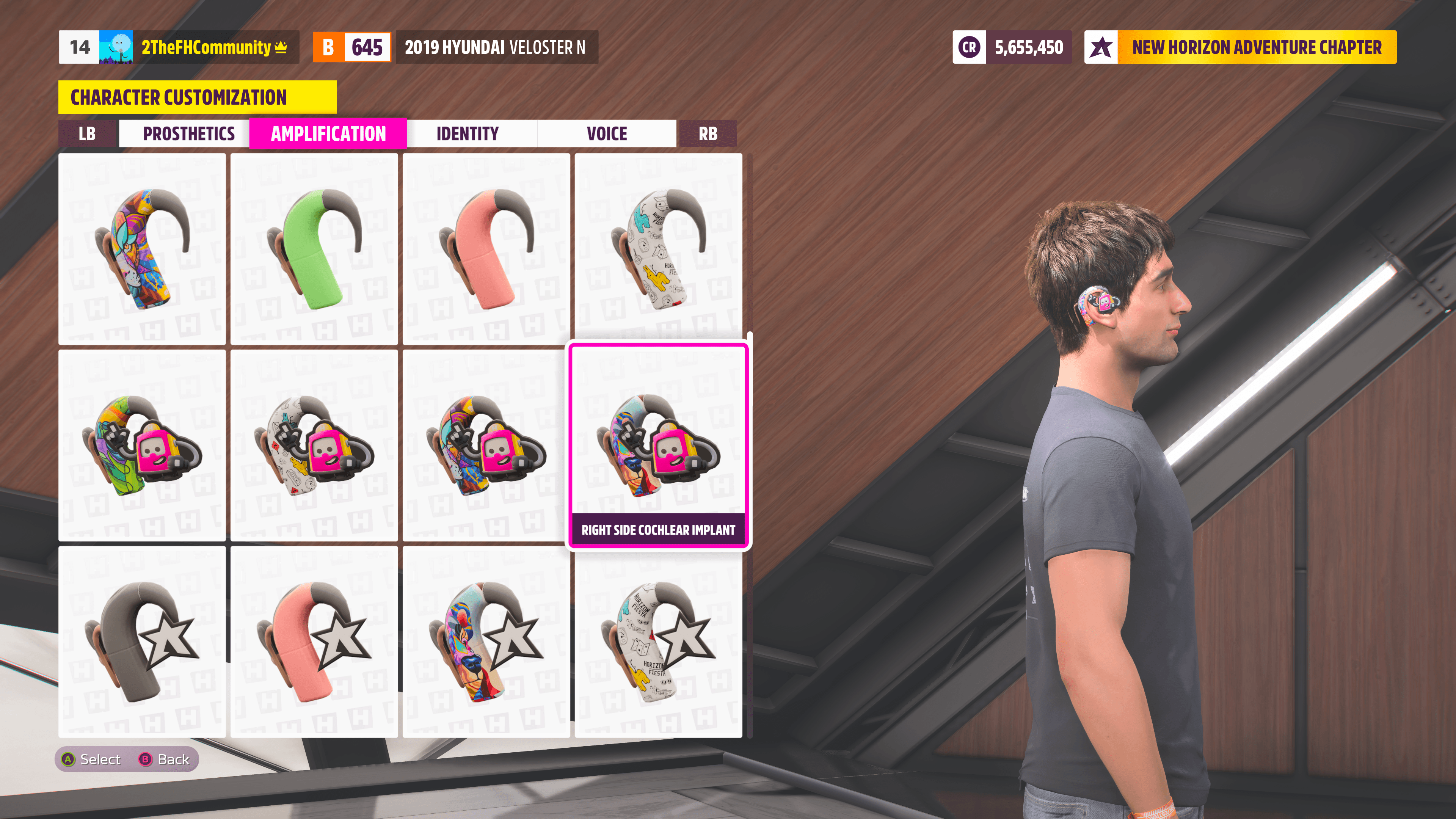 Hearing aids are immediately unlocked once you’ve downloaded the Horizon Road Trip update and can be equipped at any time through the character customization interface at any Festival Outpost or Player House.

The Horizon Road Trip Festival Playlist is inspired by the variety of racing activities available throughout Mexico’s vast landscape.

Every week from September 15 through October 13, the seasonal activities will be themed around a specific type of race event:

In addition, each week there will be one Seasonal Championship featuring five racing events rather than the usual three, as well as another featuring a single Goliath-type route that’s appropriate to the weekly racing theme. 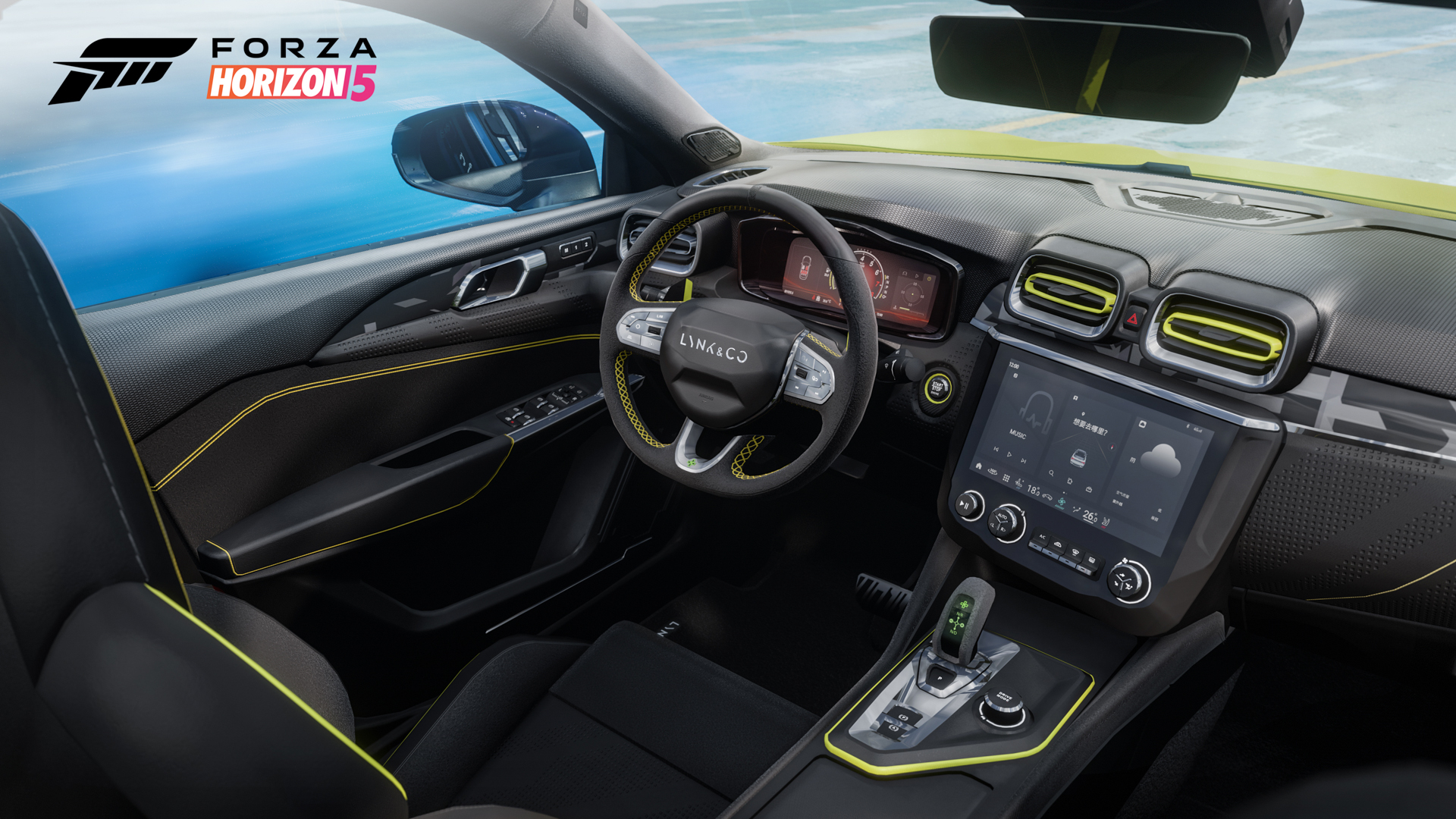 In terms of reward cars, look out for three new to Forza cars, as well as two vehicles returning from previous Forza games. For those eager to experience the 2021 Audi RS e-tron GT, you’re invited to test drive it in our monthly Forza EV Rivals event on Emerald Circuit. 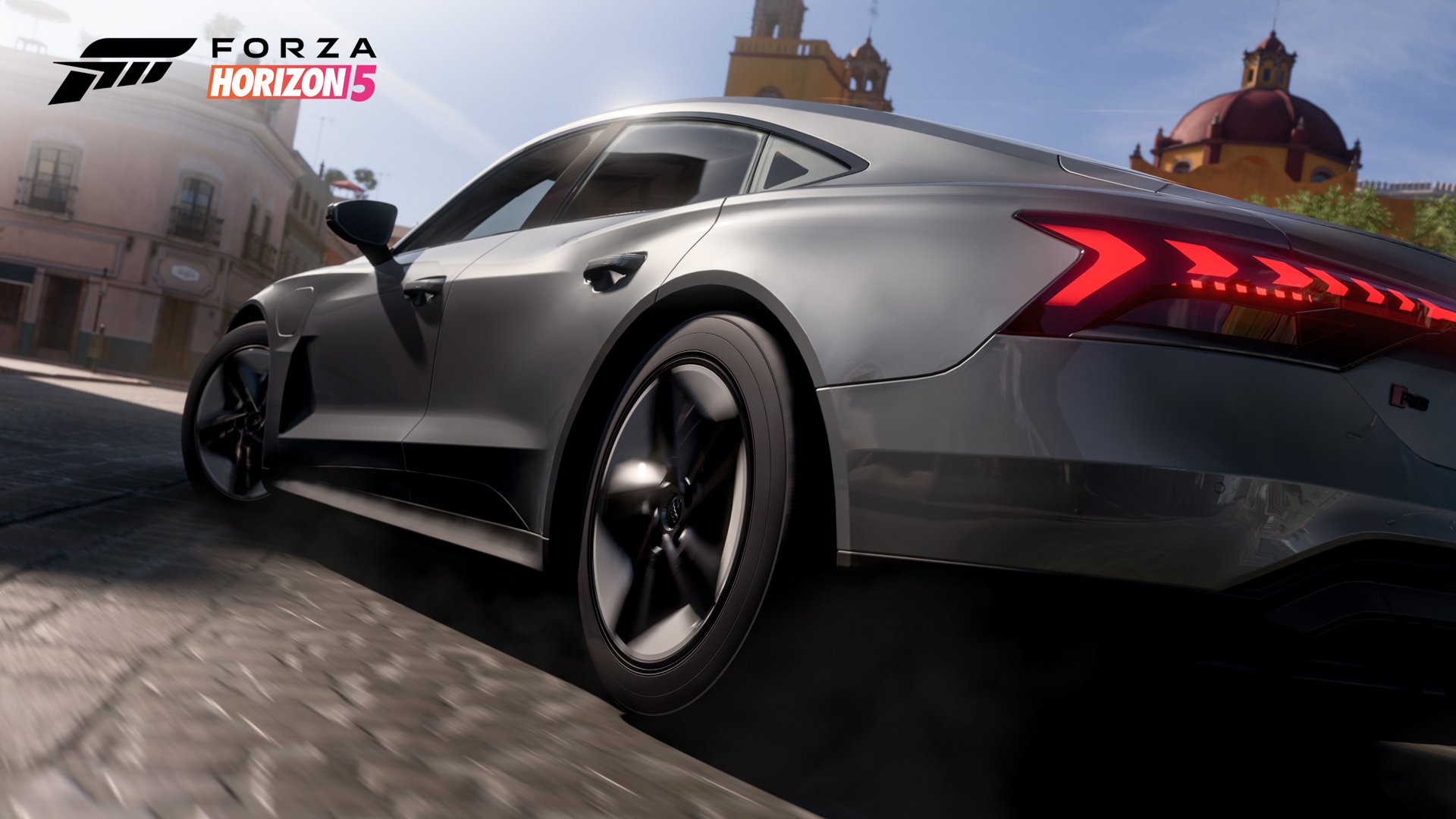 Rewind to 2018. At the Los Angeles Auto Show, Audi unveiled a glimpse of the future to the world – its battery powered e-tron GT concept. Less than a year later, it showed up again at the Geneva Motor Show, followed by new photographs of the production model in 2020 – sharing much of the same design as its concept, albeit now with visible door handles. Finally, at the 2021 IAA Motor Show, the e-tron GT was ready for the real world and began shipping to customers in March of that year. Like the Porsche Taycan, the car is based on the J1 platform. It’s powered by a 93.4 kWh capacity battery – capable of driving 238 miles before it needs to be plugged in, while two electric motors provide all-wheel-drive. This sportier RS version can reach 0-62mph in just 3.3 seconds, with a top speed of 155mph and a sustained power output of 590hp, which for the record, can be boosted to 637hp! On the outside, this car is also a looker with its purist design, luxurious curves and overall aggressive styling; that futuristic looking taillight on the rear end is what Audi calls an “animated light strip” and there’s nothing quite like it. Between that, its unique headlights and ambient interior lighting, the e-tron GT illuminates brightly putting on quite the lights show. The future of electric cars is here. 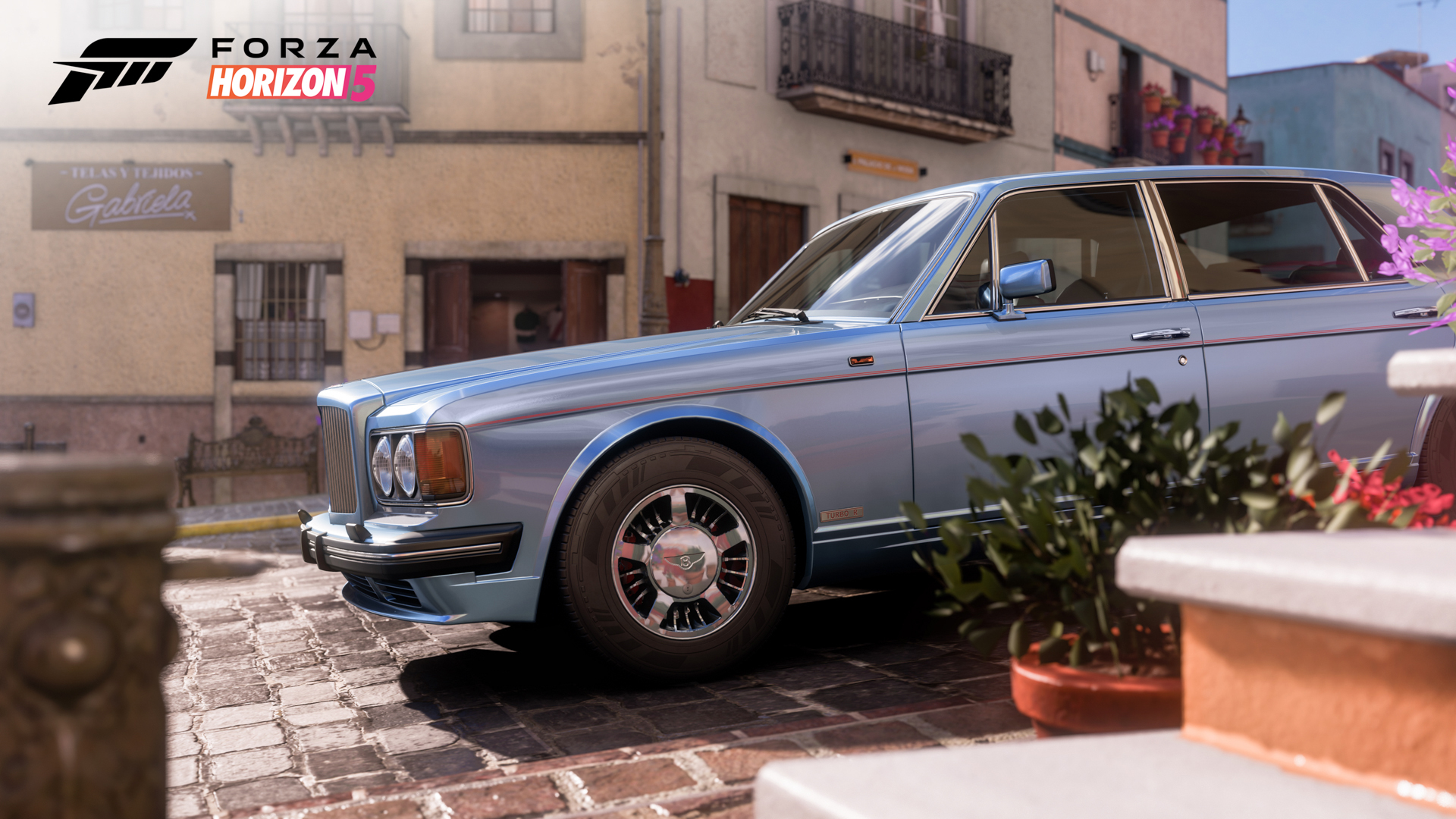 There might not be a car company that marries power and luxury better than Bentley. Quilted leather, a turbocharged V8, multiple grains of fine wood trim and 0-60mph in about six seconds: every Turbo R was hand-built, and for 30 years it was considered the ultimate Bentley. Descended from the Mulsanne and similar in construction to the Brookland model, the Turbo R boasted more speed and control thanks to its reworked suspension (fun fact: the R stands for “Roadholding.”) In classic Bentley style, this is a huge car, but its 6.75L engine more than compensated for the extra weight. When it was released, this car would have run you about $200,000, but thankfully Forza Horizon 5 is giving everyone the opportunity to sit behind the wheel of this luxury classic. 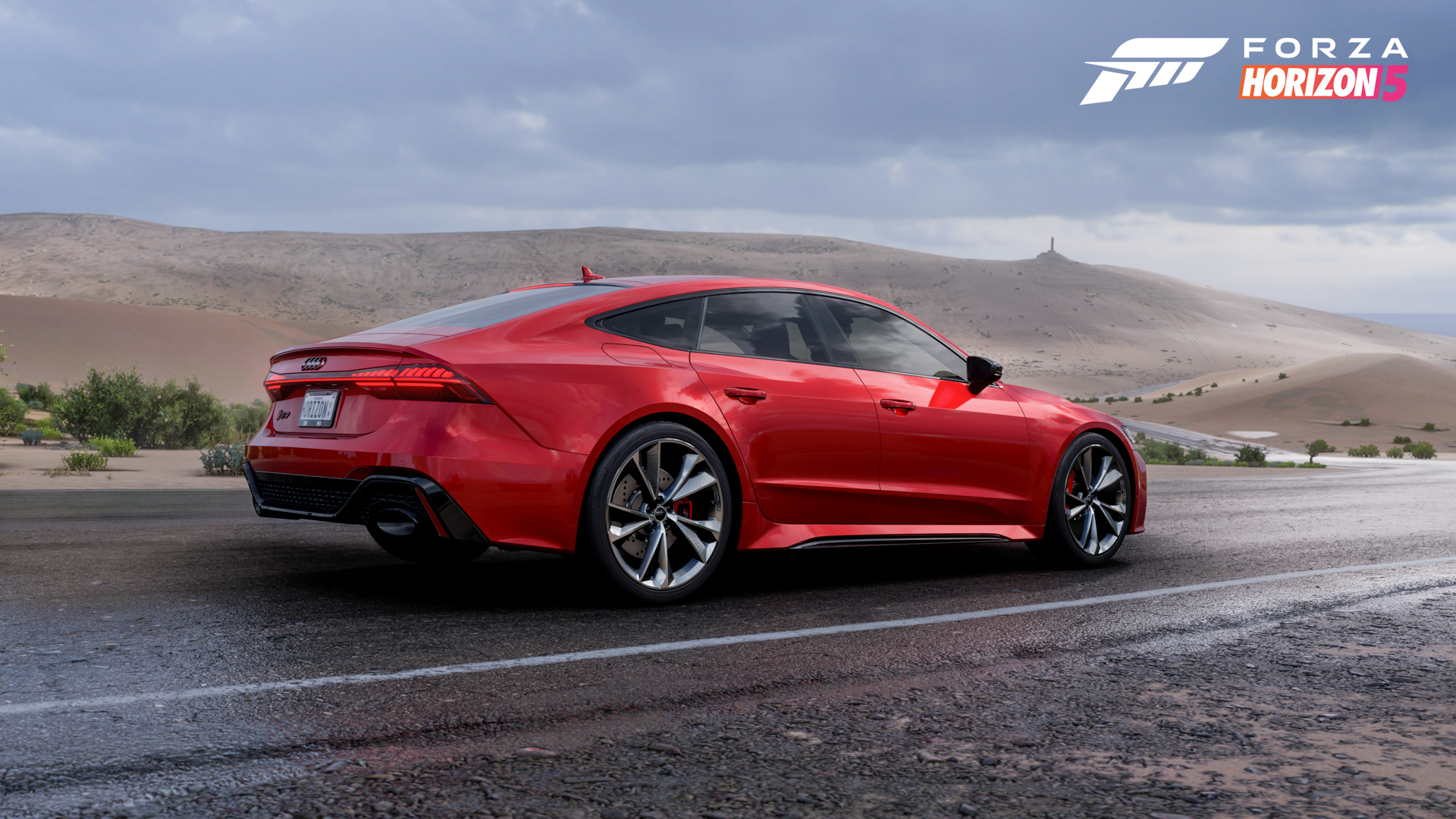 First unveiled to the world at the 2019 Frankfurt Motor Show, the 2021 Audi RS 7 Sportback is a car built without compromise. Aesthetically wild yet defining with its stylish, glacier white design lines and sporty looks, the RS 7 Sportback incorporates characteristic RS wide body design with broad flared wheel arches front and rear, a continuous LED light strip and the wide frameless Audi Singleframe – all certain to grab the attention of any passerby. With performance figures to match its refined looks, the RS 7 Sportback outputs 600 horsepower at 6250 rpm and produces 590 lb⋅ft of torque at 2050 rpm through its 4.0-liter twin-turbocharged and intercooled DOHC 32-valve V8 engine and 48V mild-hybrid system. When combined, this premium class coupé is capable of 0-62mph speeds in just 3.6 seconds with a top speed of almost 190mph. With agility at the forefront of its driving experience thanks to dynamic all-wheel steering, the RS 7 Sportback ensures that every moment on the road counts with outstanding performance at every turn. 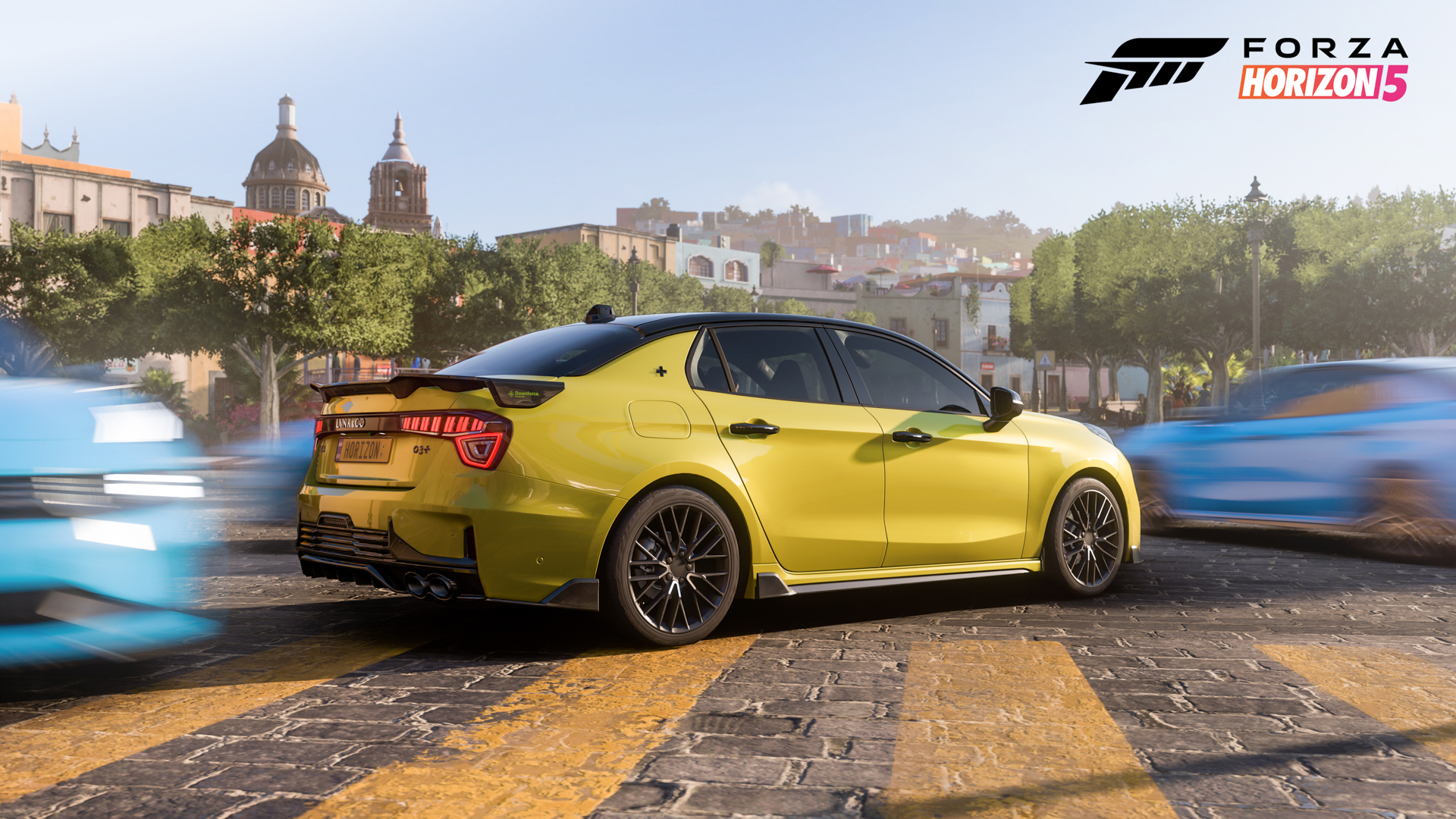 The Lynk & Co 03+ is a compact sedan manufactured by Chinese-Swedish automaker Lynk & Co, who are owned by the same parent company as Volvo. The car uses all-wheel-drive and presents drivers with numerous engine options. At first glance, one could easily mistake the Lynk & Co 03+ as an average four-door sedan, but this car has broken new ground in motorsport with participation in the 2019 World Touring Car Cup using a custom regulated car built by Cyan Racing. Meanwhile, in 2020, the car finished second in the qualifying race of the 2020 TCR China Touring Car Championship season finale, securing the drivers’ title on behalf of Shell Teamwork Lynk & Co Motorsport. Drivers in Forza Horizon 5 can look forward to the 2021 Lynk & Co 03+, a performance version of the sports saloon that takes the driving experience to the next level with 254 horsepower delivered through its 2.0-liter four-cylinder, 260 lb-ft of torque and an 8-speed automatic manual, which all combines for a 0-60mph speed of 5.9 seconds. 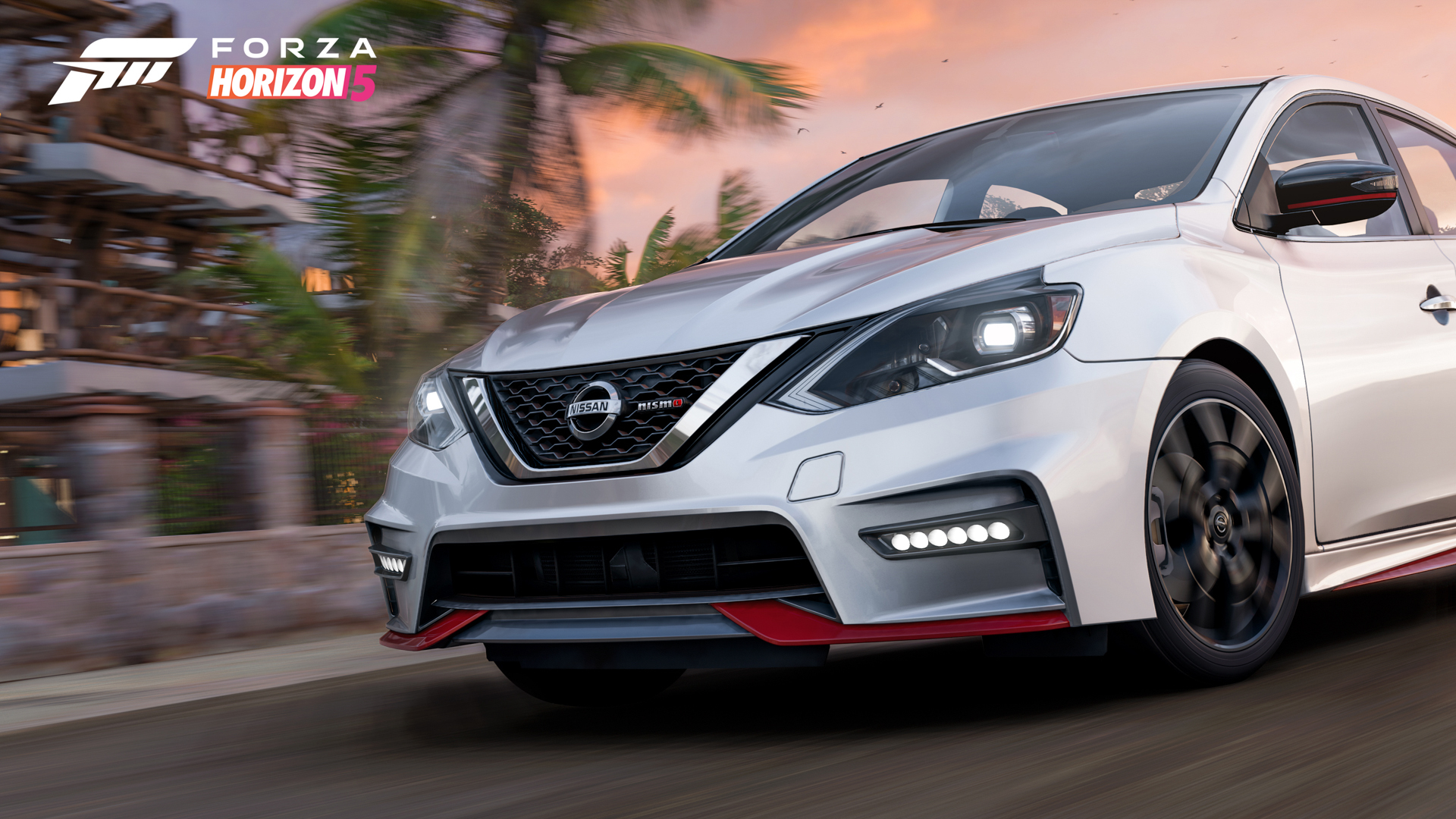 Part of the seventh-generation family of the Nissan Sentra four-door sedans, which featured a design touting aerodynamics and premium flairs front and center, the 2018 NISMO facelift is capable of 188 horsepower and was the first turbocharged Sentra to be introduced by Nissan in the North American market. With a six-speed manual transmission, this unique trim of the Sentra received all the NISMO bells and whistles, including lowered performance-tuned suspension, racing seats, LED taillights, the iconic red interior trim and of course, a NISMO fitted body kit and wheels. It’s a sports car facelift where you’d least expect it and the result certainly pays off, both on the exterior and even under the hood where all the magic happens.

The Horizon 10-Year Anniversary is almost here, and we can’t wait to celebrate this incredible milestone with our community in Forza Horizon 5. We’ll have more details to share soon, stay tuned!