When the pony cars of its era were getting bigger, the 1971 AMC Javelin-AMX fit right in. No longer a unique model, the AMX emulated the look of the Corvette with bulging fender arches and a Trans-Am-inspired V8 capable of 330 horsepower and mid 14s in the quarter mile.

The Javelin AMX is a classic muscle car and one of the last of its kind – an audacious pony car that drove for dominance at the height of the muscle car era and was considered a potent competitor at every racetrack. Now you can bring it and all 330 of its horses to the drag strip in Forza Horizon 5 by earning 20 PTS on this week’s Festival Playlist. 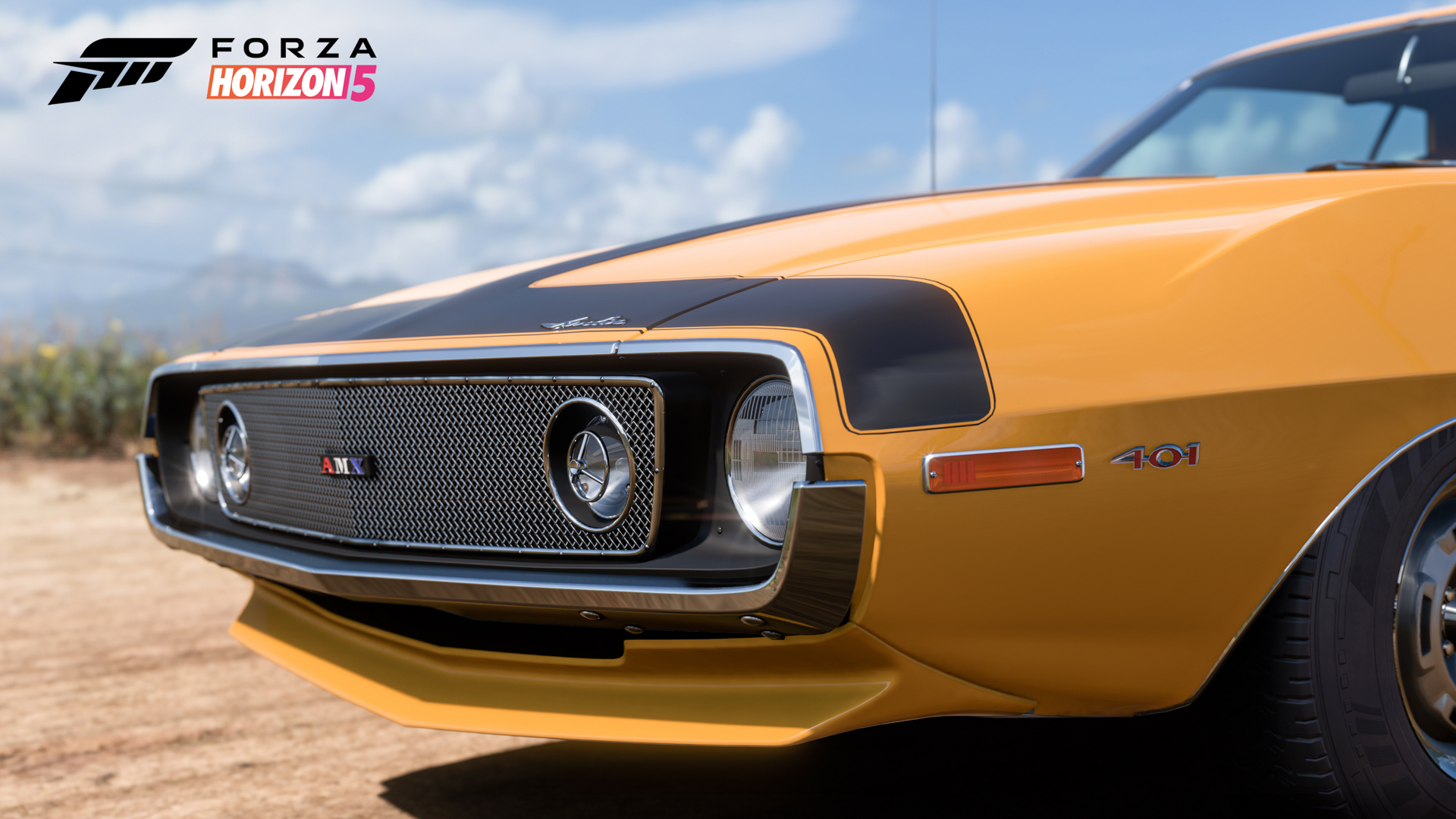 You can also test drive the 2022 CUPRA UrbanRebel Racing Concept and set your fastest lap time in Forza EV Rivals on the Arch of Mulegé circuit. You’ll be able to redeem this car for free from your Message Center once the new series begins. Elsewhere in Mexico, our Monthly Rivals spotlights the 2013 Cadillac XTS Limousine on the Estadio Circuit. Post a clean lap to qualify for the leaderboard.

Available through January 5, 2023, here’s a look at the series rewards for Horizon Holidays:

Secret Santa has also returned with the Holiday Tree Outfit and a secret new-to-Forza car up for grabs! Simply send gifts through the Forzathon Shop or Gift Drop to contribute to the progress bar. Once enough gifts have been sent to meet the criteria, rewards are distributed to all players and can be redeemed through the Message Center. 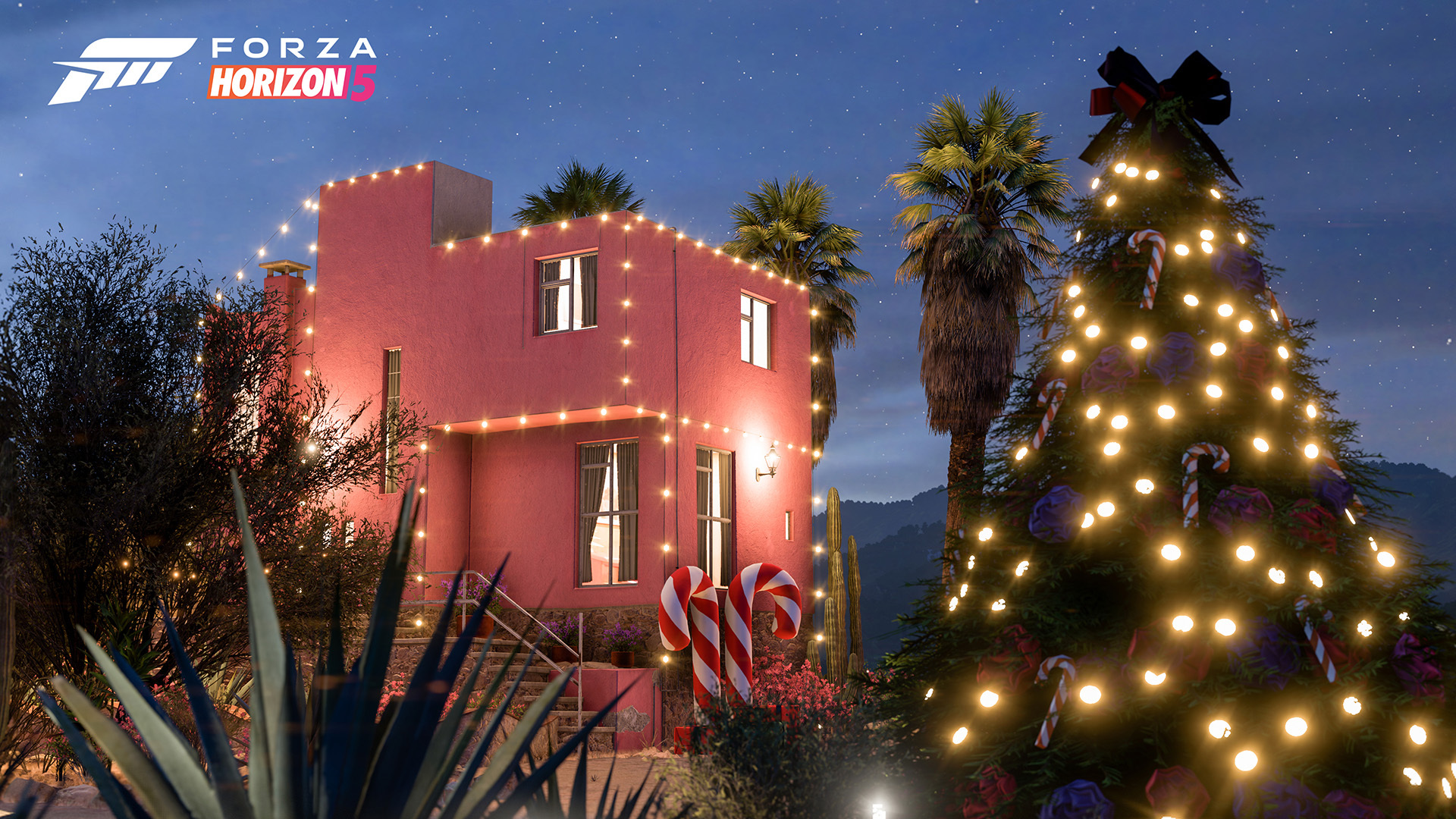 Throughout the Horizon Holidays, look out for festive decorations all over Mexico, from the Horizon Wonderland in Mulegé to the Ice Rink Stadium and even your own Player House!

This week’s events and rewards in Forza Horizon 5 are available through Thursday, December 15:

The Weekly Forzathon Challenge spotlights a small but mighty experience. Get ready for bubble trouble behind the wheel of the 1957 BMW Isetta 300 Export. Spend those newly acquired Forzathon Points on the 1997 Lotus Elise GT1 and the 1995 Porsche 911 GT2 and get into the festive spirit with the Reindeer Antlers and Red Nose clothing items and the Jingle Bells car horn. 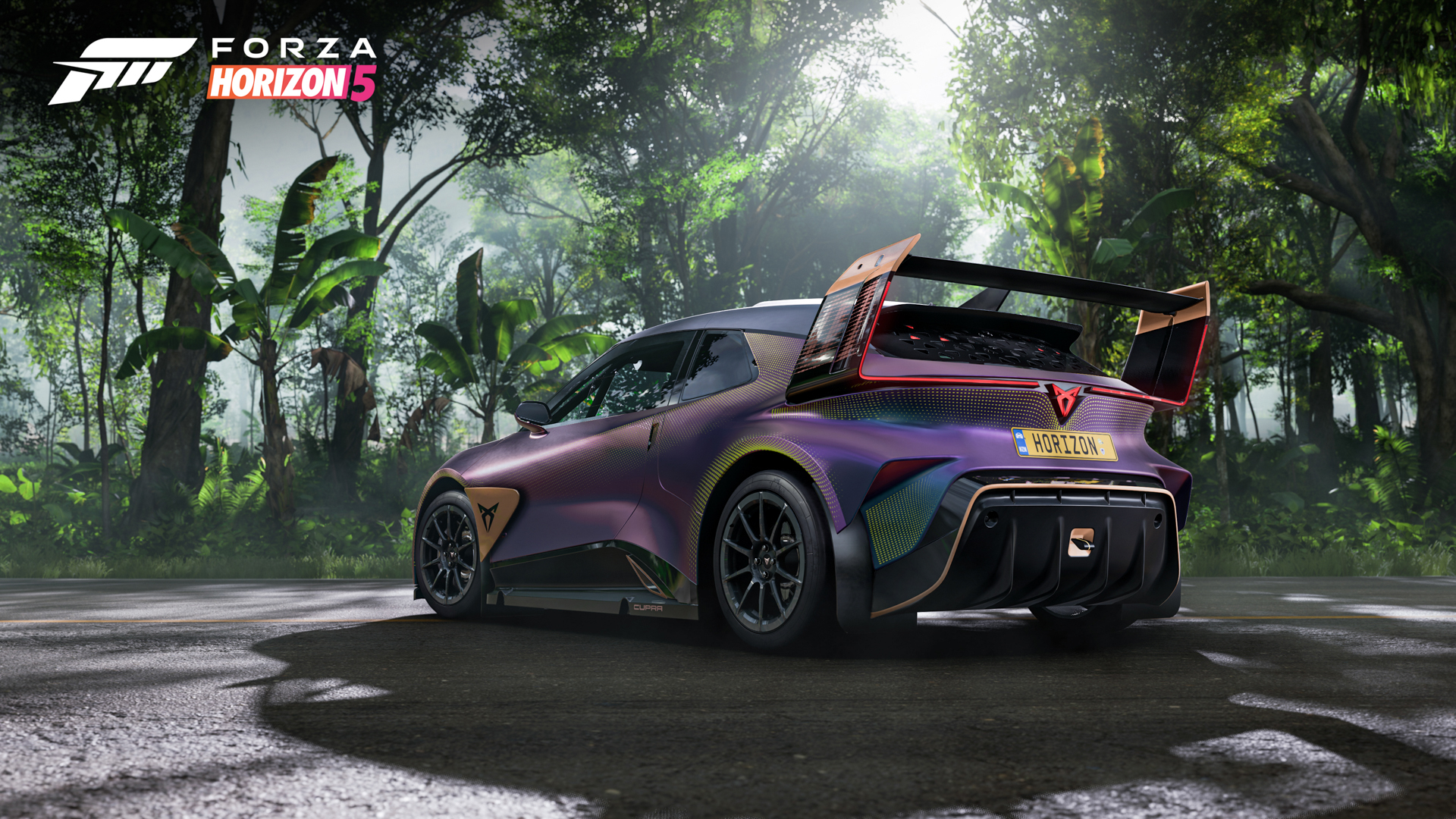 The Trial is a Super Saloons special with the 1991 BMW M3 as your reward. Over in EventLab, Fame and Fortune await courtesy of Fatefu1Bliss. Cross the finish line first to unlock a Super Wheelspin.

You’re invited to push the 2022 CUPRA UrbanRebel Racing Concept to the limit in Seasonal PR Stunts, including the Basejump Danger Sign and the Escarpment Speed Trap where you can win a pair of Super Wheelspins. And don’t forget to check out the Frozen Rush Speed Zone on Hot Wheels Park to win another Super Wheelspin. 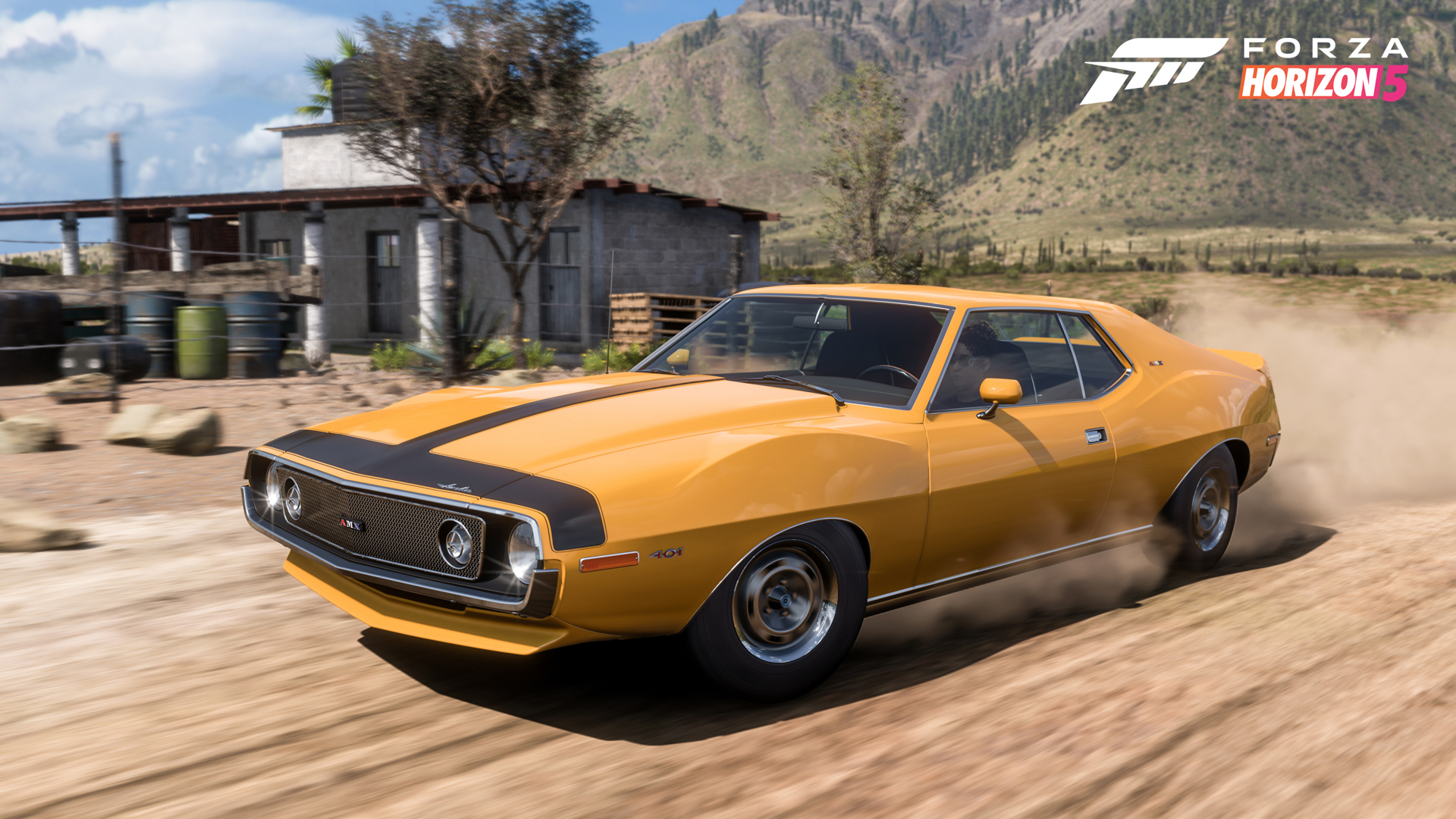 There’s a triple serving of holidays events in Seasonal Championships. Unlock the 2015 Jaguar F-TYPE R Coupé in Toys Under the Tree, the 2013 Audi RS 4 Avant in Yule the Boss and the 2018 TVR Griffith in Not so Silent Night. Over on Hot Wheels Park, you can also win the 1989 Porsche 944 Turbo by Melting the Ice.

This week’s Treasure Hunt is all about the Driving Season. The clue reads: “Drive home for the Holidays in a famously green manufacturer.” Solve the riddle and find the chest to be rewarded with 100 Forzathon Points. Also, we’re hearing the Snowmen are playing hide and seek around your home! Photograph the Snowman at the Casa Bella Player House in Mulegé to unlock the Sleigh Bells car horn. 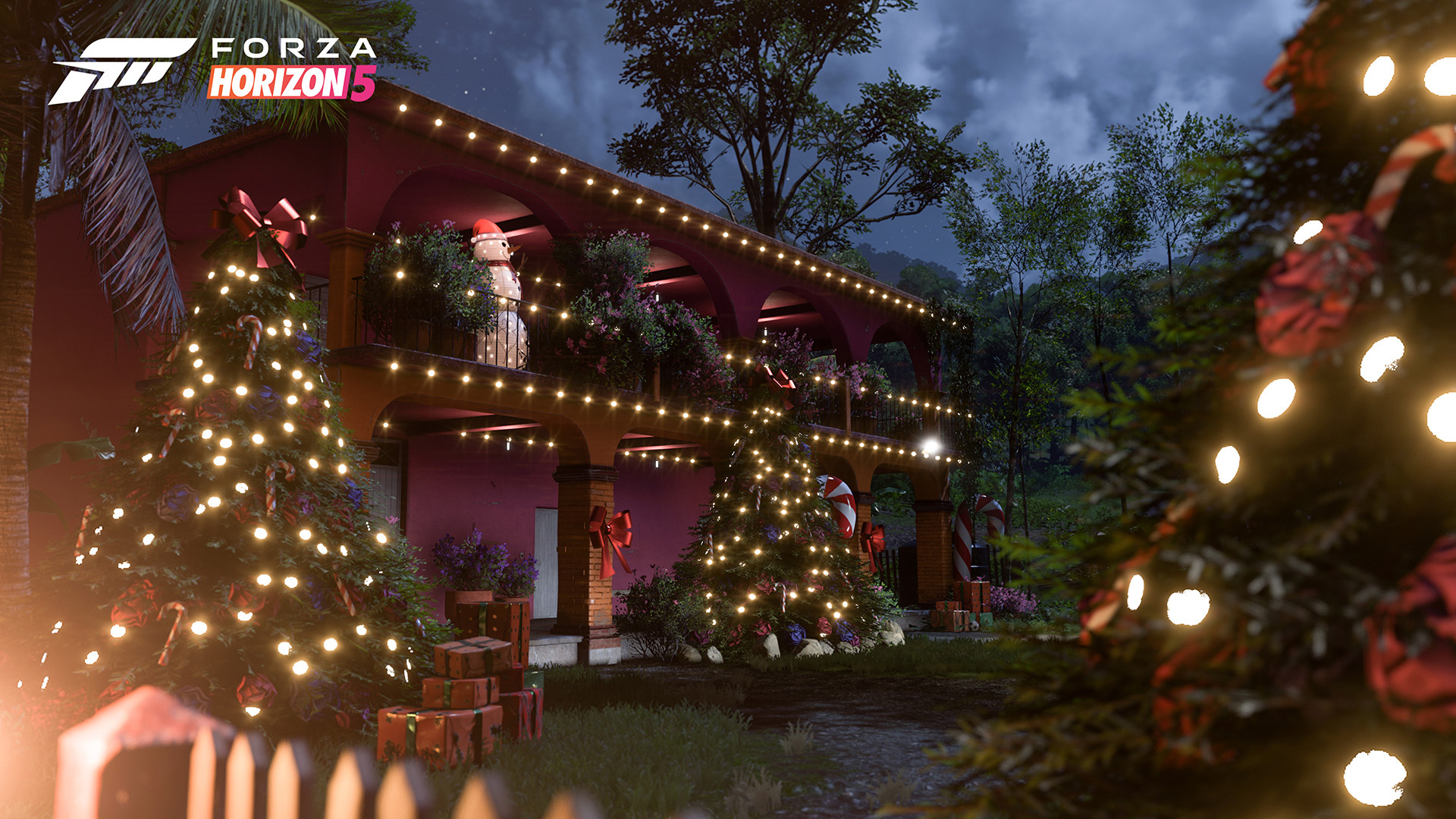 Lastly, earn 3 Clean Start Skills in Horizon Open Racing and you’ll earn the Holiday Sweater to keep your warm throughout the festive season.

That’s the rundown of this first week of holiday themed activities around the Horizon Festival. We’ll be back next week for the second course of events and rewards. Until then, discuss this week’s Festival Playlist content over on the Forza Forums and don’t forget to share your ideas for future updates and improvements on our official Suggestions Hub. See you in Mexico!

The JDM Cars You'll be Driving This Series

Reach Peak Performance in Mexico with the 2010 Renault Clio R.S.

Join us for the first Forza Monthly and Let’s Go livestreams of the year!

Celebrate 40 Years of Renault R.S. with the Clio R.S. 16 Concept

Leave Your #FORDzathon Mark in the MG6 XPower

Push Your Driving to the Limit in #FORDzathon